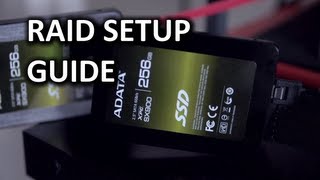 If you are looking to increase performance, provide protection against data loss and improve your computer in general, you should be looking at implementing RAID (Redundant Array of Inexpensive/Independent Disks).

For a long time RAID setup was a difficult process to implement, it was expensive and it was primarily used by businesses with huge IT departments.

Today, nearly all PCs support RAID and newer versions of Windows provide software RAID that does not even require any special hardware. Thanks to all of this, RAID is now more accessible to computer users than ever before. So, how do you go about performing a RAID setup on your computer?

Which Type of RAID Setup?

In order to properly complete a RAID setup, you need to decide what type of RAID configuration you need. We will not go into great detail with the various types here (see RAID Levels page for detailed breakdown), but will provide a quick overview:

The first thing you need is a backup of all your important data. If you are putting it on a fresh system with no OS, or you are putting disks together for a separate array, then you don’t need to do that.

Depending on your software, there are further considerations:

You will need to have a RAID controller, which is probably already installed on the motherboard of your PC. If your PC does not have integrated RAID, you can use an adapter card, which typically sell for around $100.

You will also need two or more hard drives. It is important to note that using drives of different capacity only gives you double the capacity of the smallest drive. So, if you have a drive that is 500 GB and a drive that is 750 GB, then the total space will only be 1 TB. You will save yourself a lot of time and effort by just using drives that are exactly the same, including in model and size.

In order to do a physical install of a RAID adapter, do the following:

If you already have a RAID adapter on your motherboard, you can skip to this point.

This is only a basic overview and guide for RAID setup and should work for most scenarios, but because of many system configurations available today, it is possible that your particular situation might be different.

Before you go, check out one of our three most popular articles!